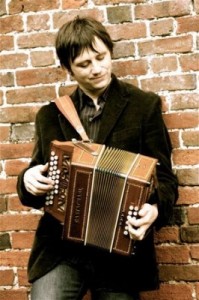 The event will raise the spirits and get toes tapping with the ticket-buying public at Grange Hall, Radcliffe on Trent on Friday 24th April, 7.30pm.

The event is cabaret style; audiences bring their own drinks and nibbles.

Both the band and Cutting, a virtuoso on Melodeon and accordion are on national tour.  Radcliffe is on their circuit this year courtesy of the National Rural Touring Scheme. The scheme, titled Village Ventures locally, brings top-class entertainers to out of city centre community venues., with much cheaper tickets as a result.

Andy Cutting’s music weaves his own compositions with new and classically influenced melodies from Central France and Eastern Europe. He is known as a player of great warmth and a witty rapport with both audience and fellow players.

RadVentures is sponsored by Arts Council England, Notts.CC &  Rushcliffe BC.